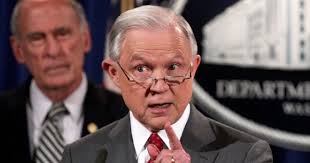 As part of a testimony at the Senate Judiciary Committee on Justice Department oversight, Sessions responded to a query from California senior senator Dianne Feinstein, who raised the issue of Dark Web crime.

“It seems to me that the problem of the Dark Web being used by criminals is going to grow in the coming years,” Feinstein stated.

Sessions responded that the phenomenon was “worrying” law enforcement.

Discussing AlphaBay, the Dark Web portal the US took down in July, Sessions added that users were “using Bitcoins and other untraceable financial capabilities.”

“It is a big problem,” he concluded.

The two politicians’ mutual headache over the Dark Web hints at a possible focus for future maneuvers on digital privacy.

While the testimony was somewhat erroneously reported by other media resources as anti-Bitcoin, Sessions nonetheless only suggested by association that Bitcoin’s anonymity served criminals’ objectives.

Such a perspective is outdated, however, as trends suggest Dark Web users have abandoned Bitcoin in favor of privacy-centric altcoins such as Monero long ago.

A broader understanding of Bitcoin is still the topic of debate for US lawmakers more generally, with the situation on the ground for users meanwhile remaining shaky.

This week, popular exchange Bitfinex announced it would withdraw from the US marketcompletely by Nov. 9 due to regulatory barriers.