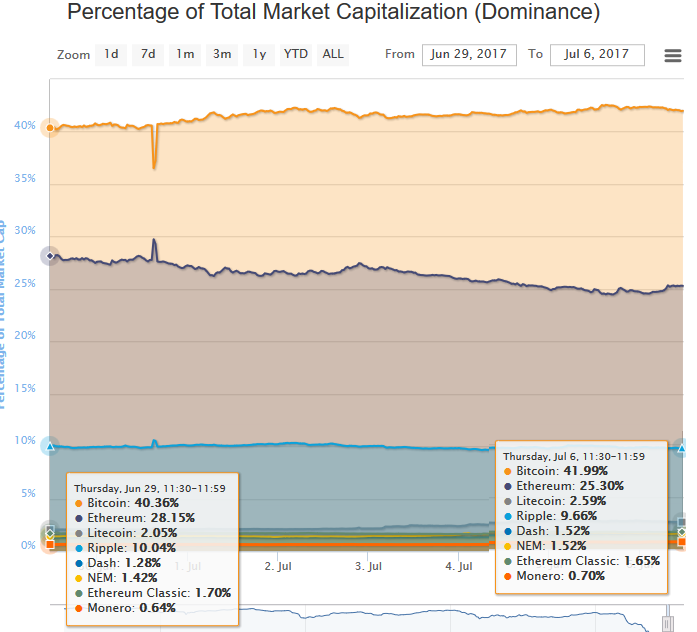 The past week has not been great for the crypto markets, as most coins have struggled just to tread water.  However, two top-10 cryptocurrencies–Litecoin and Dash–have weathered the storm and produced double-digit percentage gains in the past week.

As recently as March 13, the litecoin price was only $3.85. Since that time litecoin has grown more than 1,200%. In the past week alone, the litecoin price has increased a remarkable 23%, reaching as high as $55 before settling down to its present value of about $51. Litecoin has also experienced significant volume in recent weeks. On July 5, Litecoin’s 24-hour trading volume surpassed the $1 billion mark for the first time, briefly giving it a higher volume than both bitcoin and ethereum.

Part of the reason for litecoin’s price movement is the overall surge in the crypto markets.  The bitcoin price, for instance, has more than doubled in that time frame. However, the litecoin price has outpaced many of its altcoin peers because of a flurry of positive developments. In April, Litecoin miners agreed to activate SegWit, and on May 10th the scaling solution was successfully implemented. In June, BitGo announced support for Litecoin, and before long European exchange BitStamp integrated BitGo’s Litecoin multi-signature security service to support Litecoin trading pairs. That same month, Developer Charlie Lee resigned from Coinbase to work full-time on Litecoin.

Dash has also had an impressive week. Since last Thursday, the Dash price has increased 15%, enabling the anonymity-centric altcoin to cross the $200 threshold. On July 6, the Dash price rose to an all-time high of $225. It has reversed course since then, declining to its present $206 value. Nevertheless, this has still been a banner week for Dash.

Positive news from both developers and businesses fueled the Dash price increase. Earlier this week, BitInstant founder Charlie Shrem revealed he is working on a project to create prepaid debit cards that users can fund with Dash. The service will convert the Dash into fiat currency, so cardholders can use the debit card even at businesses that do not accept cryptocurrency payments.

Investors have also been bullish about the new Dash roadmap for mass adoption, which includes the deployment of Dash 12.1, scaling solutions, and mining decentralization.

Collectively, litecoin and Dash have increased their market cap share by more than 23% during the past week. Litecoin now controls 2.59% of all cryptocurrency capital with a market cap of $2.6 billion, while Dash’s $1.5 billion valuation gives it a 1.52% share.