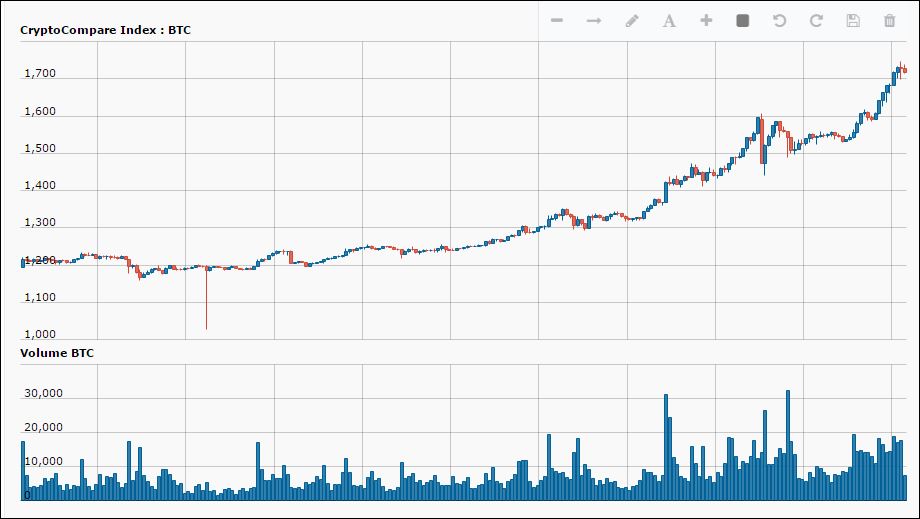 Bitcoin surged past $1,700 on Tuesday, extending an astonishing rally that has seen the total market value of all virtual currencies more than double since the beginning of 2017.

The price of a single bitcoin BTCUSD, +6.41%  has gained more than $300 in the past week, to trade as high as $1,747 on Tuesday, according to the CoinDesk Bitcoin Price Index, which aggregates pricing across a handful of the largest exchanges. Meanwhile, daily trading volume has surpassed $1.3 billion for the first time, according to Coin Market Cap.

However, prices varied widely between exchanges. On Kraken, one of the biggest U.S.-based exchanges, one bitcoin recently went for $1,578, while simultaneously trading at $1,742 on GDAX, another popular U.S.-based digital-currency exchange.

Price discrepancies were even wider across different markets, with coins trading on Korean exchanges like Korbit and Coinone in excess of $2,000, valued in Korean won USDKRW, +0.30%

Spencer Bogart, head of research at Blockchain Capital, said the Securities and Exchange Commission’s decision to revisit its rejection of the proposed Winklevoss Bitcoin Trust exchange-traded fund was one possible catalyst for bitcoin’s recent rally.

But he said the massive appreciation in smaller rivals like Litecoin and Ripple has probably contributed to the bulk of bitcoin’s move: Many of these coins are denominated in bitcoin, so investors who wish to buy them must first have it on hand.

The virtual-currency market has all the trappings of a bubble, Bogart said, though he thinks it could have more room to rise before a correction occurs. A correction is typically defined as a decline in an asset from a recent peak of at least 10%.

Chris Dannen, founder of New York-based cryptoasset fund Iterative Instinct, said the massive wealth creation in the space has fostered a pattern where wealth shuttles back and forth between bitcoin and other alt-coins, or alternative cryptocurrencies.

Though Dannen added that he suspects at least some of the recent run-up could be the result of manipulation by a handful of “whales”—wealthy traders with large reservoirs of cryptocurrency wealth, who use their relative heft in the marketplace to move prices to their advantage.

“There’s a group of whales out there, they kind of bounce around from coin to coin,” he said. “They clearly have a system. It’s almost like the tide is coming in and out; you know there’s a pattern.”