Bitcoin Price Records Staggering $550 Increase in a Single Day to $4,550

After all, it seems as if the Chinese cryptocurrency industry and its central bank, the People’s Bank of China (PBoC), has minimal impact on bitcoin, Ethereum and the global cryptocurrency market.

On September 4, PBoC along with three Chinese government financial agencies declared initial coin offerings (ICOs) as an illegal method of fundraising. Subsequent to the announcement of China, the price of Ether, the native currency of Ethereum, and leading cryptocurrencies such as bitcoin declined substantially in value. The price of Ether dipped below the $280 mark, while bitcoin price moved closer to the $4,000 region.

However, within a 24-hour period, both bitcoin and Ethereum have recorded substantial gains, demonstrating a complete recovery from the announcement of PBoC. Specifically, the price of bitcoin surged from $4,000 to $4,550, as investors and the market displayed absolute confidence in bitcoin.

In a statement, Bitfury vice chairman George George Kikvadze explained that PBoC and the Chinese cryptocurrency exchange market do not have a major influence over the global bitcoin and cryptocurrency market. Prior to the regulation of the zero-fee trading system, the vast majority of bitcoin users and analysts perceived China as the largest bitcoin and cryptocurrency market. However, that has not been the case for awhile. US, Japan and South Korea have overtaken China in almost every way, in terms of trading volume, user base and activity.

With multi-million dollar venture capital investment and exponential growth in user base, Japan’s largest bitcoin exchange BitFlyer is set to expand throughout the US and South Korea’s leading exchange Bithumb evolved into the largest cryptocurrency exchange in the world.

“PBoC’s impact is way overblown. China is not as important as before. Just 15 percent of global bitcoin trade vs Japan + Korea + USA = 80%,” said Kikvadze.

Additionally, even in the case of Ethereum, South Korea remains as the dominant exchange market with 34 percent market share, while US falls behind as a distant second with 22.4 percent market share. Hence, unlike 2013, China, its government and financial regulators have minimal impact over the global cryptocurrency ecosystem.

Some cryptocurrency analysts have suggested that the price of bitcoin recovered in such a narrow timeframe because speculative investors were not aware that the ICO ban targeted Ethereum and was not associated with bitcoin in any way. But, that theory is not coherent with the fact that Ethereum was also able to recover to exactly where it was prior to the ICO ban from PBoC. Therefore, it is highly likely that investors across the global bitcoin and cryptocurrency market have become aware of the limited impact China can cause.

More importantly, as CCN previously reported, many indicators suggest that bitcoin will most likely sustain its upward momentum in the upcoming days and weeks. Two important short-term factors to acknowledge are the rapid adoption of the Bitcoin Core development team’s transaction malleability and scaling solution, and rapidly growing demand toward bitcoin from both institutional and professional investors as a result of the rising tension between the US and North Korea. 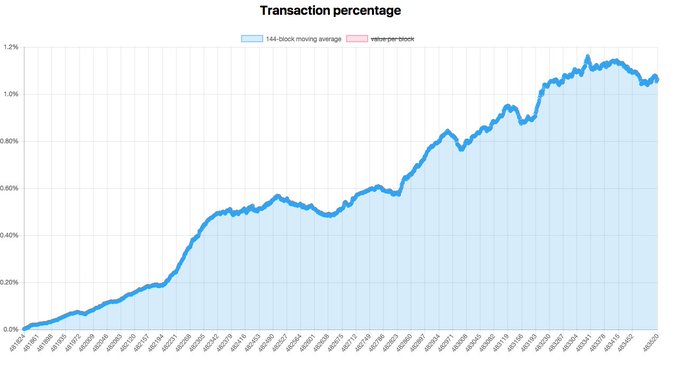 Not even 2 weeks after activation and the % of #SegWit tx’s per block is rising nicely. Good work everyone! http://segwit.party/charts/#

As SegWit adoption continues to increase at a rapid rate, bitcoin transaction fees will be reduced significantly, even by over 50 percent, as the GreenAddress wallet development team suggested.